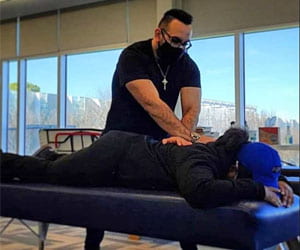 As he enters 10th quarter at Palmer Florida, Mina Hanna has nothing but life-changing, uplifting anecdotes around his goal of becoming a chiropractor.

Mina will never forget the day in October of 2019 when he found himself suddenly unable to write his name during class. That same day, he saw his primary care physician and was advised to get to the hospital immediately; he would have an MRI scan among other tests.

“I remember thinking it was probably just a vitamin deficiency and that I really didn’t have time for these tests while studying for my Palmer tests,” he recalls.

Hours later, the hospital staff returned with a multiple sclerosis (MS) diagnosis and orders for an inpatient stay. With lesions on his brain, they had him on anti-inflammatories and under close supervision for a full week.

The irony is that Mina was learning about MS and inflammation in his classes at this time. So, when his neurologist wanted to prescribe experimental medications, Mina wasn’t comfortable with it, “I didn’t want to take my chances.”

Instead, Mina took the holistic approach. He did it for his health but also because practicing what he was learning (and would soon be preaching) was extremely important to him. He started eating whole food, working out and getting adjustments regularly.

In due time, Mina found a slowdown and then a cease in his MS symptoms.

His next life-changing event was losing 100 pounds. He got into clean cooking and even started a cooking show on Instagram (@shogun93).

“My body was working so hard just to do something simple. I couldn’t breathe going up the stairs.” His excess weight combined with MS led him to believe that, without holistic, chiropractic care and clean eating, he would have been on medications the rest of his life and, quite possibly, paralyzed.

It was nothing short of a miracle for Mina that he was a Palmer student when he received his MS diagnosis. Soon after his diagnosis, one of his professors visited him to share that she, too, has MS. Many others from his classes paid visits to show love and support.

After helping out with the family car business for a few years, Mina knew it wasn’t his calling. Instead, he has always been drawn to the medical field, and earned a biomedical science degree. In his quest to choose his career, he came across a YouTube video of a chiropractor helping a young boy who was unable to walk upright. After seeing the results and watching this young boy stand tall again, Mina’s decision was made.

Not familiar with the chiropractic field, Mina dove further into researching it. Palmer came up time and time again and he loved knowing that we were the first in the world to educate in chiropractic care. He took a leap of faith, applied and got in!

Mina’s First Adjustment: Yet Another Coincidence

Once he got into Palmer College of Chiropractic Florida, Mina decided to get regular adjustments after never having had any. On day one of going to the Palmer Chiropractic Clinic, he ran into a friend from fourth grade who ended up being the student who gave him his first-ever adjustment.

What would Mina tell someone considering the chiropractic profession?

“Chiropractic translates to ‘done by hand’ in Greek. To have the skills to help someone out of pain anywhere in the world is the best tool you can ever have. No prescription pad or anything else is needed. If you give the body optimal conditions it needs to function (eating clean, getting adjustments), it will work as it’s intended to work,” Mina concluded.

Posted on May 4, 2022 by Sarah Tisinger.
Previous Next
We use cookies on our website to give you the most relevant experience by remembering your preferences and repeat visits. By clicking “Accept”, you consent to the use of ALL the cookies.
Do not sell my personal information.
Cookie SettingsAccept
Manage consent