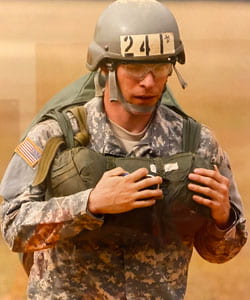 Derron McLaury always wanted to be the person protecting others so they wouldn’t have to go to war. Hailing from a military family in Michigan, Derron joined the Army in 2006 to fulfill his life’s purpose and took two tours – one to Iraq and one to Afghanistan.

His time in the military is what lead him to chiropractic by way of an injury shortly after he joined the 82nd Airborne division. During a low-altitude training exercise, a strong gust of wind blew just before his landing. At about 100 feet off the ground, Derron and his parachute drifted backward, and he landed directly on his tailbone.

Over the next 18 months, Derron saw a neurologist, multiple physical therapists and a medical doctor in an attempt to find relief. It wasn’t until he got out of the military that he saw a chiropractor thanks to a suggestion from his mom. At 23 years old, Derron walked out of his first chiropractic appointment feeling as he did before he was injured. That’s when he decided he wanted to become a doctor of chiropractic.

Palmer College of Chiropractic was the clear choice. Not only had Derron heard good things about Palmer’s chiropractic program but, after visiting multiple schools, it was the only college that felt right.

“I felt Palmer’s programming was the strongest and found myself walking into chiropractor’s offices specifically looking for their Palmer degree on the wall,” he commented.

The only tough choice for Derron was whether to enroll in school in sunny Florida or in the Midwest. He was a bit worried about being able to focus while so close to the beach, so he landed on Palmer’s main campus for that reason and because of its strong curriculum, rehab center and gym facilities.

He’s keeping his post-graduation plans open but serving his country has not left this veteran’s mind. Derron would ideally like to work as a doctor of chiropractic in a Department of Defense or Veterans Affairs hospital or clinic so he can provide the same care that he once needed to soldiers and vets. In fact, he’s already prepared to apply for a DoD internship in his 7th trimester.

Posted on May 6, 2022 by Sarah Tisinger.
Previous Next
We use cookies on our website to give you the most relevant experience by remembering your preferences and repeat visits. By clicking “Accept”, you consent to the use of ALL the cookies.
Do not sell my personal information.
Cookie SettingsAccept
Manage consent