How Carol Evans, daughter of a Palmer alumnus, and her husband, Richard, established a scholarship at the Main campus.

Carol Evans readily admits, “When you tell me I can’t do something, that’s when I get in trouble.”

It’s that spirited drive and determination, sparked by a passion to advocate for change and progress, that has fueled Carol’s fervor to walk multiple precincts campaigning for candidates in state and local elections.

“And most of them won!” the Oklahoma native proudly acknowledges.

Carol and her husband, Richard, recently celebrated another victory when they achieved their goal of establishing a scholarship for Palmer students at the Main campus.

The daughter of Thomas Elliott, D.C. (Main, ’47), Carol is a lifelong chiropractic patient who’s also dedicated much of her life to championing the chiropractic profession. 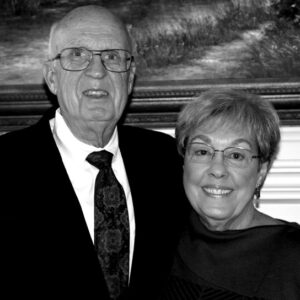 Her family’s chiropractic lineage spans four generations, from her grandfather, George Elliott, D.C., (who graduated in 1909 from the Palmer-Gregory Chiropractic College in Oklahoma) and her great-aunt, Mary Elliott, D.C. (Main, 1919), one of the profession’s earliest female chiropractors, to her niece, Lori Elliott Sprague, D.C. (Main, ’99), who practices today in the same building in Tulsa, Oklahoma, as Carol’s father and brother.

Although just three years old at the time, Carol fondly remembers when her father was a student and they would take walks through the colorful gardens in Little Bit O’ Heaven.

She also recalls the less rosy chapters of the profession’s early history, including instances of law officials masquerading as patients who would sit up following their adjustment, slap a pair of handcuffs on the chiropractor and arrest them for “practicing medicine without a license.”

As recently as 1973, when Carol and Richard relocated from Texas to Baton Rouge, Louisiana, their chiropractor, Dr. Nell Ashcraft, had to practice in stealth, minus any identifiable office signage, as Louisiana was the last U.S. state to formally recognize the chiropractic profession in 1974.

“Knowing the struggles that many chiropractors have experienced and the health benefits that Carol and I have enjoyed from chiropractic care provided the incentive to assist the profession,” said Richard, who retired in 2007.

With the primary funding coming from a donation by Richard and Carol, plus support from their son, Brent, and Diane Elliott, who was married to Carol’s younger brother, the late Thomas Elliott, D.C. (Main, ’72), they established the Evans-Elliott-Sprague Endowed Scholarship. They also supported building of the new David D. Palmer Learning Commons, where the Evans-Elliott-Sprague Study Room can be found.

“I didn’t think ‘normal people’ could do that. I thought you had to be a Bill Gates to create a scholarship, and you don’t have to,” said Carol, a former grade-school teacher.

“I wasn’t in the profession, but this is a way that Richard and I can participate. After witnessing great prejudice against generations of chiropractors, I just wish my dad was here. He would be thrilled — and he wouldn’t believe it.”

Posted on October 31, 2022 by Sarah Tisinger.
Previous Next
We use cookies on our website to give you the most relevant experience by remembering your preferences and repeat visits. By clicking “Accept”, you consent to the use of ALL the cookies.
Do not sell my personal information.
Cookie SettingsAccept
Manage consent