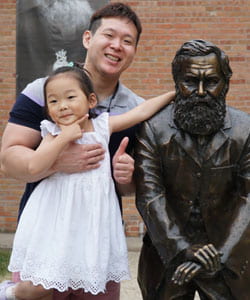 Third-trimester student Kilbo Yun is 6,500 miles from his home in Seoul, South Korea, but with his wife and daughter by his side as he pursues his dream of becoming a Palmer chiropractor, he’s soaking in every step of his journey!

Kilbo, who worked as a personal trainer for 12 years and managed his own gym for six of those years, always focused his work on rehabilitation with the goal to help people who wanted to improve their pain using exercise.

“That is when I began to believe in the mind-body connection and the healing power of proper chiropractic care,” said Kilbo.

“D.D. Palmer’s philosophy really spoke to me. He taught that the causes of subluxation are thought, trauma and toxins. I strongly agreed with his idea that subluxation takes place by way of our thoughts. After I learned his philosophy, I started to explore more information about the chiropractic field.”

With Palmer graduates practicing all over the world, Kilbo found himself influenced by their work.

“Some of the professors I had in my undergraduate studies in South Korea were Palmer graduates, and they drove me to want to study in the U.S. For me, Palmer’s strong history and wonderful professors were all I needed to know in order to move forward.”

Yet making the decision to study abroad wasn’t an easy one for Kilbo and his family.

“When I decided to study abroad it was not easy because I was managing my own gym, and my daughter was just two years old. But my wife and I had deep conversations, and we decided that we could study abroad together. This is because we believed that family always has to be together, and when we are together, we can get through anything. I believe the belief was right, and the reason that I could achieve three terms successfully was because of my family; because they help me get through the moments that I strongly felt indolent, abandonment, and despair. I believe that my wife, my daughter, and myself are one team, even though the person who studies is only me. If I could not be together with them, I could not finish the course.” 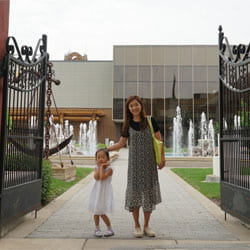 Kilbo also sees the opportunity his studies give his daughter, saying “My daughter is now four years old, and she is my everything. When I decided to study abroad, I wanted her to enjoy the wide nature of the U.S., and see various things that she may not experience, if she just grows up in South Korea. This is because we lived in Seoul, which is the capital of South Korea. I believed that she should see more nature and more various things when she was young. I also wanted to show what is studying and how I study. I wanted her to know that studying is not something boring, but it can be something cool. I don’t want to say ‘you must study,’ I wanted to just show. I don’t believe that she has to be a chiropractor, but I want to show what is chiropractic, how they study, what they do. So each end of term, I tour the campus with her and my wife, and they really like that.”

Kilbo hopes to open his own practice after graduation and has a special interest in helping pregnant women and babies.

“I believe this will help more people grow up without pain.”

To anyone considering pursuing a career in chiropractic, Kilbo says “I’m 37 years old so I know you can achieve anything you set your mind to. Don’t give up! Learn what you can now and continue learning after graduation. You can do it!

Be proud of yourself for how far you’ve already come, you’re already so far from where you used to be. Believe in yourself and keep your self-talk positive!”

Posted on May 5, 2022 by Sarah Tisinger.
Previous Next
We use cookies on our website to give you the most relevant experience by remembering your preferences and repeat visits. By clicking “Accept”, you consent to the use of ALL the cookies.
Do not sell my personal information.
Cookie SettingsAccept
Manage consent