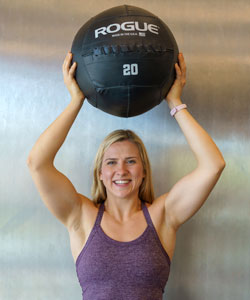 Meet Catherine Kravets (Coach Cat), a first-tri student with big ambitions. After being told to be skinny all her life, she’s on a mission to empower women. Not only physically but mentally, too.

“When I graduate from Palmer I want to work with female athletes and pregnant and postpartum women. I am excited about the female emphasis on strength training, nutrition and chiropractic care as a holistic approach. I believe we can continue to break the cultural and societal norms that tell women to eat less and be skinny,” she said.

As an athlete and fitness instructor, Coach Cat knows the importance of movement and a healthy body. What she didn’t know was how chiropractic care could help her injured back.

“I grew up around western medicine since my parents are medical doctors, but after hurting my back while deadlifting, the only solution was a chiropractor,” she said.

Catherine’s parents each moved to the U.S. from Poland and Ukraine to practice medicine. Born in the U.S. Catherine grew up in Illinois. She graduated from Wheaton College with an Applied Health Sciences degree. While in school she started coaching and even created a “Female Fitness” group.

“I showed them barbell movements and some gymnastics movements and would emphasize to them the beauty of strength and building our bodies as females, contrary to what culture tells us to do,” she said.

Following her graduation, she worked three jobs related to fitness for ten months until she began her time at Palmer College.

“The reputation of the alumni and the school’s emphasis on the philosophy of chiropractic attracted me to Palmer,” she said. “When I spoke to any sort of health-care provider about my passion for chiropractic and holistic health care, they all said the same thing, ‘Go to Palmer! They do it the best.’”

Outside of the classroom, she attends Palmer’s pediatrics and prenatal club and motion palpation club. And outside of Palmer you’ll likely find Coach Cat at CrossFit OC3 too. 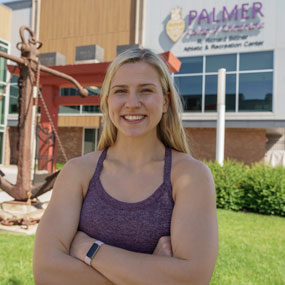 “Coach Cat” is what I go by in the fitness world. I tried to tell my first gym my name was ‘Cath’ and I guess they were too tired from working out to pronounce the ‘H’ so it’s stuck ever since.”

Although she is early in her journey at Palmer, her plans for the future involve serving people who love to lift as much as she does.

“One day, I want to be a holistic health-care provider who incorporates an emphasis on strength training and nutrition,” she passionately said. Her philosophy is that strength is beautiful and accessible to all women!

Posted on June 15, 2022 by Sarah Tisinger.
Previous Next
We use cookies on our website to give you the most relevant experience by remembering your preferences and repeat visits. By clicking “Accept”, you consent to the use of ALL the cookies.
Do not sell my personal information.
Cookie SettingsAccept
Manage consent