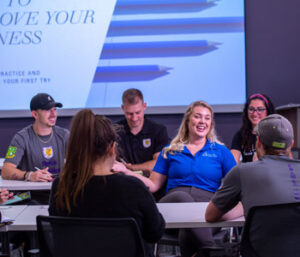 “Applications to Palmer have been increasing over the past two years,” said Michael Norris, Ph.D., vice chancellor for admissions. “Palmer College has invested heavily in the student learning experience over the past several years, and I believe we’re seeing the positive impact of those strategic investments.”

Since 2017, Palmer’s Main Campus has been largely reimagined, with the construction of a leading-edge fitness center, modern student clinic, a student union outfitted with gaming, the David D. Palmer Learning Commons, state-of-the-art technique classrooms and wet and dry labs, and new student housing.

“Being the first chiropractic college in the world, this is the oldest campus in chiropractic, but with these investments we’re also the most innovative and cutting-edge campus in chiropractic,” says Dennis Marchiori, D.C., Ph.D., Chancellor and CEO of Palmer College.  “This is a hands-on, people-focused profession, and these investments are part of our commitment to creating a premier learning experience that prepares our students to become accomplished and successful Doctors of Chiropractic.”

“The job outlook for our graduates is strong,” says Norris. “We have the largest alumni base among all chiropractic colleges, and they’re actively recruiting our students to either join or take over their practices. Our CareerNetwork posts about 3,500 jobs annually, so there are severalfold more jobs than there are graduates.”

With more than 2,100 students enrolled across Palmer College’s three campuses, approximately one out of every five chiropractic students in the U.S. attends Palmer College.

Palmer College of Chiropractic is the first and largest chiropractic college in the world. Its main campus is in Davenport, Iowa. Its branch campuses are in Port Orange, Florida and San Jose, California.

Posted on November 29, 2022 by Sarah Tisinger.
Previous Next
We use cookies on our website to give you the most relevant experience by remembering your preferences and repeat visits. By clicking “Accept”, you consent to the use of ALL the cookies.
Do not sell my personal information.
Cookie SettingsAccept
Manage consent